A stump pressure of 50 mm Hg had a sensitivity For a stump pressure of 40 mm Hg, the values were sensitivity, There is no doubt that the EEG is affected by cerebral ischaemia but the technique suffers from many limitations. The EEG signal reflects only cortical events and does not disclose ischaemia in deeper structures.

The raw EEG is difficult to interpret. Its monitoring in real-time requires considerable skill and experience. The processed EEG, for example the compressed spectral array, is easier to interpret but considerable information is lost during its conversion to a processed format. This type of monitoring examines not only the cortex but the deeper structures of the brain.

Stimulation from a peripheral nerve passes through first- and second-order neurones and brainstem synapses before evoking a response in the somatosensory cortex. Unfortunately, this theoretical promise is not borne out by clinical studies.

Carotid Endarterectomy and Carotid Artery Stenting in the US Medicare Population, 1999-2014

Near infrared spectroscopy NIRS gives a value for regional cerebral oxygenation r S o 2 which is a composite measure of arterial venous and capillary oxygenation, although the predominant influence is the venous blood. A number of factors account for the limitations of NIRS in carotid surgery.

The signal may be contaminated by the blood flow in extracranial tissues and by the effects of ambient light. Changes in r S o 2 may be related to redistribution of cerebral blood flow during anaesthesia rather than the effects of cross-clamping.

Transcranial Doppler relies on the fact that the thin petrous temporal bone provides an acoustic window that allows ultrasound visualization at the middle cerebral artery. A probe is placed on the petrous temple bone and the skilled operator is able to detect the Doppler signal generated by blood flow in the middle cerebral artery. TCD may be used to monitor both cerebral haemodynamics and the occurrence of emboli. A marked reduction in MCAv on cross-clamping has been taken as an indication for shunting.

Unlike the other monitors discussed, TCD is able to detect emboli. However, significant particulate embolization correlates with deterioration in cognitive function after CEA, postoperative ischaemic events, and evidence of new lesions on brain MRI. TCD monitoring is undoubtedly operator-dependent.

The primary intervention in the event of the patient developing evidence of cerebral ischaemia upon carotid cross-clamping is the insertion of a shunt. Transcranial Doppler studies suggest that an augmented arterial pressure is also needed to maintain an adequate blood flow through a surgical shunt. Hypocarbia may cause ipsilateral vasoconstriction and extend the area of cerebral ischaemia. Hypercarbia may produce contralateral vasodilatation and cause a steal phenomenon.


It is certainly appropriate to administer supplemental oxygen to the patient, and it has been suggested that in some cases this may be sufficient to reverse the cerebral ischaemia. The majority of patients presenting for CEA suffer from hypertension. However, while cerebral autoregulation can be expected to adjust to the lower arterial pressure, the time course of this adaptation is unclear. The greatest benefit is seen from CEA if the operation is performed soon after presentation. Although an association between poorly controlled arterial pressure and stroke has been demonstrated, no study has demonstrated that reducing the arterial pressure does indeed reduce operative risk.

At present the best advice that can be offered is that it is reasonable to take the time to achieve good control of the arterial pressure in patients who have a preoperative systolic blood pressure consistently above mm Hg, who do not have severe bilateral disease, and are not having frequent neurological events. It is probably appropriate to proceed to surgery even in the presence of marked hypertension in the patient who has severe bilateral disease and is having frequent TIAs.

This is an area where further research is needed. By the very nature of their carotid disease, patients presenting for CEA are arteriopaths and are likely to have extensive atheromatous disease. The patient presenting for CEA is at significant risk of perioperative myocardial ischaemia and infarction. Anaesthesia should be conducted carefully with a view to haemodynamic stability. Automated ST-segment analysis should be used if available.

Cardiovascular lability in hypertensive patients undergoing anaesthesia and surgery is a well-documented problem. These patients are prone to episodes of hypotension and hypertension in the intraoperative period. Carotid cross-clamping is frequently associated with a marked increase in arterial pressure. 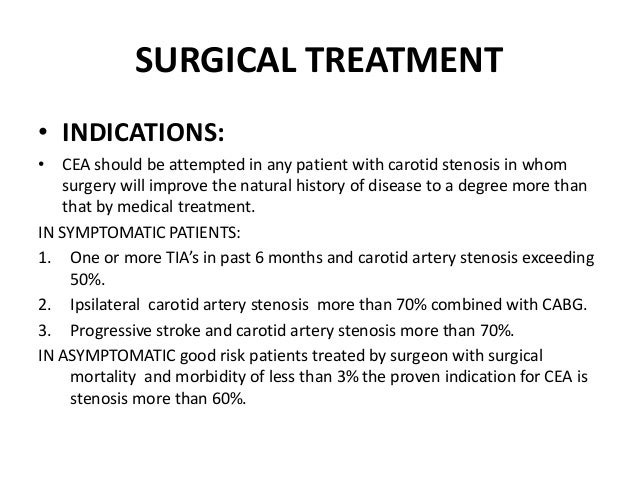 CEA combines the haemodynamic effects of anaesthesia with those of surgical manipulation of the carotid bifurcation. Rerkasem and colleagues 78 identified four studies that compared the haemodynamic changes seen in patients undergoing CEA under regional and general anaesthesia. In all four trials, arterial pressure decreased in the GA group after induction of anaesthesia.

Three of the four trials found an increase in arterial pressure in the local anaesthesia group on carotid cross-clamping. In the fourth study, by McCarthy and colleagues, 60 pre-clamp mean arterial pressure was significantly lower in GA patients than LA patients but post-clamp mean arterial pressure did not differ from pre-clamp pressure in either group. Both postoperative hypertension and hypotension are common after CEA. However, the frequency of such cardiovascular perturbations is difficult to quantify because different studies use different definitions of hypotension and hypertension and studies frequently report the number of episodes of hypo- or hypertension rather than the numbers of patients with each condition.

Postoperative hypertension can plausibly be explained by a reduction in sensitivity of the carotid baroreceptor reflex although a small study conducted by Yakhou and colleagues that included 10 patients undergoing CEA showed no change in the carotid baroreflex response after CEA. In contrast, a spectral analysis study of the impact of CEA on arterial pressure control in a group of 60 patients suggested that surgery is associated with an acute deterioration in carotid baroreflex sensitivity. This study compared patients with unilateral and bilateral carotid artery disease. Patients with bilateral disease had a more marked response to direct stimulation of the carotid sinus than those with unilateral disease and this was attributed to sensitization of the baroreflex response to compensate for the dysfunction of the contralateral side.

After surgery, patients with bilateral disease had a more marked deterioration in baroreflex function. A study by Timmers and colleagues suggests that this baroreflex dysfunction persists after surgery. In the patient with postoperative hypotension, the anaesthetist may feel caught between the head and the heart. On one hand, the low systolic and mean arterial pressure may compromise myocardial perfusion and indeed predispose to internal carotid artery thrombosis.

On the other, raising the arterial pressure across a carotid artery which is now no longer partially occluded by a stenosis may lead to excessive increases in cerebral perfusion. The conventional treatment in this setting is to render the patient normotensive with the use of fluids and vasopressors. It seems reasonable to suggest that transcranial Doppler monitoring should be used if available to monitor MCAv in patients who are given vasopressors for postoperative hypotension, especially patients who had severe bilateral stenosis or marked hypertension before surgery and so may be prone to hyperperfusion.

In patients with marked hypertension, the appropriate clinical course of action is more clear cut, there is a concern that marked hypertension may injure both the heart by inducing myocardial ischaemia and the head by causing cerebral hyperperfusion, and arterial pressure reduction is appropriate. The particular agent to be used can be at the discretion of the clinician. Unusually, for neurological practice this is a setting in which the use of vasodilators may be appropriate.

Heparin is administered in the intraoperative period before cross-clamping to reduce the risk of thromboembolic complications. A fixed dose of heparin may be given, often units, or dosing may be weight-based.

A fixed dose regimen is associated with a wide dose range per kilogram of body weight and with a wide variation in the intraoperative activated clotting times ACT. A study of fixed dosing with units of heparin found an association between neck haematoma and intraoperative ACT, but the only neck haematoma that required reoperation occurred in a patient with an ACT of more than s.

Although performance on neuropsychometric tests did not appear to be statistically influenced by heparin dosing or the degree of ACT elevation, there was a trend for deficits to be associated with lower heparin doses. The authors concluded that weight-based heparin dosing may reduce the incidence of complications such as haematoma formation or decline on neuropsychometric tests and may result in more predictable ACT values, but no statistically compelling clinical advantage could be demonstrated.

On the basis of these findings they suggested that either weight-based or fixed dosing is acceptable. The ACE study found lower incidences of stroke, death, and myocardial infarction within 30 days and 3 months of surgery in patients taking 81 or mg of aspirin than in those taking or mg. It has been suggested that the use of protamine may be associated with an increased incidence of stroke. However, protamine administration does appear to reduce wound drainage and the risk of haematoma.

Two retrospective studies did not find an association between protamine administration and adverse outcome in CEA. Gough, personal communication. It should be borne in mind that some patients presenting for CEA may subsequently be candidates for coronary artery by-pass grafting and therefore face a repeat exposure to protamine.

CEA is associated with an acute increase in cerebral blood flow and middle cerebral artery velocity as measured by transcranial Doppler.

On the other, if autoregulation is intact, the arterial pressure should be controlled with a view to the needs of the coronary circulation. Further studies of the immediate changes in static autoregulation after surgery would be of value.


These patients develop the constellation of symptoms known as the hyperperfusion syndrome with ipsilateral headache, hypertension, seizures, and focal neurological deficits. If not treated properly it can result in cerebral oedema, intracerebral or subarachnoid haemorrhage, and death. Scozzafava and colleagues 90 recently described a systolic blood pressure target of between 90 and mm Hg in this setting. It has been proposed that cerebral hyperperfusion occurs in those patients who were maximally vasodilated before surgery because their cerebral perfusion was limited by a tight carotid stenosis.

Cerebral perfusion pressure is restored after surgery, but the cerebral vasculature remains paretic and they are unable to vasoconstrict. Karapanayiotides and colleagues 45 have described MRI findings that are consistent with this hypothesis. CEA is a valuable operation which has a firm evidence base and can reduce the incidence of stroke in vulnerable patients.